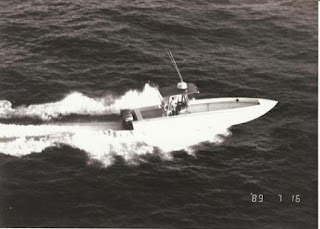 Our last submission for the month comes from Larry O'Donnell. His manuscript is untitled, but it is an action thriller loosely based on experiences he and his associates had working for Customs in Florida in the 1980's. My comments, as always, are in purple.
To read Dianne's comments, click here.

Paco Rivera-Guerrero paced back and forth on the dock. He looked down into the engine compartment of his 37-foot vessel for about the hundredth time since 0100. The boat was a re-built Midnight Express, designed to meet the needs of smugglers. One of his (who does 'his' refer to? If it belongs to the boat, then shouldn't it be hers?) engines was still disassembled and the Bahamian mechanic did not seem to grasp the urgency of the situation. As the mechanic reached up for his fourth beer since two o’clock, Paco lost some of his patience. He kicked the can into the water and locked eyes with the mechanic.


The mechanic said, “Yo mon, get me another beer, or I’ll be walkin’.”

Paco drew a .45 caliber pistol and pointed at the mechanic. “If you don’t have that engine running in thirty minutes, you’ll be floating.” (I reversed the order of sentences here so that Paco drawing his gun IS the punctuation)To punctuate his statement,  (I am also a bit curious as to whether anyone else is about on the docks in the middle of the afternoon or are they alone or is it a private dock? Maybe a hint of setting, water lapping, gulls, sun glinting off the water. Just a thought.)

“You get in big trouble here, having a gun,” the mechanic mumbled.

“I’ll risk it. You have twenty-nine minutes. If I have to find another mechanic and miss my schedule, you die.” He added, “I have a special relationship with the police.” (I cut that first bit because it's obvious Paco is willing to risk it if he just pulled a gun on the mechanic in broad daylight)

The mechanic, with much greater motivation, (<< ha ha, liked that; I'd be more motivated, too!)turned back to his task. A few moments later one of Paco’s crew, a Colombian who called himself Lobo, walked up the dock to the boat. Seeing Paco putting the gun back in his waistband, Lobo drew his nine millimeter Tec-9 machine-pistol from under his jacket. Paco said, “Put it away, Loco.”

The Colombian frowned. “I am called Lobo.”

“Everyone calls you Loco. You better not be loco on this trip. Put the gun away, or I’ll take it away from you.” Lobo paused for a minute and put the gun away. Paco nodded. “Stay cool.” (This is good. You’ve shown us through this exchange that Paco is definitely top dog.)


Ten minutes passed before the third crewman walked up to the boat. Like Paco, Jorge Romero was a Cuban who found the cocaine smuggling business a far better alternative to his prior career as a soldier and then a dishwasher in the Workers’ Paradise. (I like this, too. It tells us a lot about Romero in a few words.) Paco had been in a Cuban Army Special Forces unit until the General recruited him to manage his drug running sideline. Romero asked, “Is Ezzy ready for the trip?” (This mention here of the General caught my curiosity. Who is he? Is he an actual General or is it a nickname? And how is he involved in all this? Curious minds would read on to discover more... )

Paco smiled at the nickname and with mock dignity said, “Esmeralda is always ready, so long as she is treated right. It is just another routine ride to Florida. She’s made this run more times than the Viking Princess.”

“Yeah, there’s a lot more action on that ship than we ever get. The women on that ship make me crazy.” Romero frequently came back to Freeport on the ship and seldom failed to connect with what he called “a willing and wanton woman”. (I was a little confused by this last paragraph at first but I'm guessing that the Viking Princess is a cruise ship)

The only other thing I'll mention is that I have nothing invested in any of these characters. I've been told that this type of book often begins with the bad guy but I think I'd be more interested if I either liked them - even just a little - or hated them. Maybe make Paco badder (I know that's not a word but for today it is), so we hate him more. Have him do something, some random, pointless act of violence. Or, have him do something nice, something surprising. Either way we read on to find out what happens to Paco. But that’s just my opinion. Someone who reads more thrillers than I do might have something entirely different to say.


Hope this was helpful!
Posted by mshatch at 7:04 AM