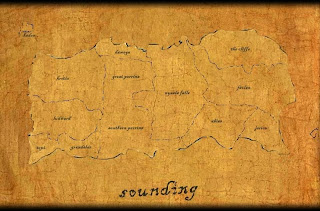 Seraphix was used to the awkward stares, but today felt different. From the moment the waterhole was in sight, she had felt a strong presence of eyes on her. She brushed off the paranoia and dropped her buckets on the ground beside the water. I think it reads more smoothly this way but that’s just my opinion.

“You‘re not like they say you are,” came a deep and unfamiliar voice.

She whirled around and for a brief second made eye contact with the man. She recognized him; she’d seen him here at the waterhole before. Turning her back, she continued dipping water into her buckets. At this point, part of me wants more description, more of a sense of where and when we are, but part of me actually likes this sense of mystery so…just something to think about.

“I have wanted to tell you that for a long time, but I could never catch you without anyone else nearby,” he said. Which makes me wonder how long he’s been watching her, and why…

She peered around only to see he was right; there was no one else there. Keeping her head low, she noted that she was much closer to the trail than he was. If he should try anything, she could burst into a sprint and he would never be able catch her. Is she that good of a runner? Just asking.

“I don’t expect you to say anything. I just hope you’ll linger a moment?” he began. When she didn’t react, he continued, “I know everyone thinks you ( do you mean ‘you’re a curse’?) a curse, like you’re something terrible, but when I look at you, I know they’re wrong. I see a girl who works hard to provide for herself and takes all judgment without a word. One who can turn the other cheek. You are the most respectable woman I have ever seen and the most disrespected as well.” I like this. It tells us something without being specific, leading us to read on…

She let the words fall onto her ears, but didn’t let any of them near her heart. love this.


“I won’t take any more of your time. I just couldn’t pass the opportunity to let you know that not everyone looks at you that way.” He turned from her and started up the path toward town.

She watched him leave, contemplating what he had said. She guessed he had cut the talk short because he had already taken a huge risk in speaking to her. If anyone caught him, he would be chastened. She grabbed the full buckets and started home.


This is great. In a single page you’ve set up an interest between these two people, hinted at something in the woman’s past, and told us that the man is brave enough to risk censure to talk to her. These are interesting people.

ps This is one of those days when I'm in two places at once. If you want to see how I manage that go here to unicorn bell where I'll be critiquing Huntress' query letter for her novel, Rapier.
Posted by mshatch at 7:09 AM