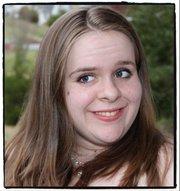 Our second submission for July comes from Sarah who has offered the first page of her novel, Masque, a YA dystopian novel. You can find Sarah at @sarahckeith on twitter. My comments are in purple.
I knew what was wrong even before my mother started weeping. There was only one reason for someone to ring at our house at this time of night. Something was wrong with Molly. I wonder if Molly should be identified. Is she the sister of the narrator? Also, how does the narrator know something is wrong with Molly and that it isn't something else. I can think of a number of reasons (all awful) that a person might get woken up in the middle of the night for. Maybe if the narrator shared some of her knowledge here, even a small bit, whether it might set up a connection between her and the reader. Better yet, show us how she feels.
My eyes snapped open as soon as I heard the little tinkling at the front of the house. My parents entered the hallway about the same time that I did. There were no locks on our doors, or on the doors of any other house in the hamlet. And as soon as I saw Charles standing inside the front door of our home, I registered  how short my nightgown was, how sheer. Is this really the first thing she thinks of? Isn't she more worried about Molly? Anyway, wouldn't she have grabbed a robe to answer the door? sorry to be picky, but these are the things that are catching my eye. Maybe if you tell us how she feels in that short nightgown, this would work better. Is she embarrassed? Ashamed? Self-conscious?
I wasn’t used to seeing him so close. On stage, he’d always looked so confident. (I like the reference to the stage here, makes us curious about him. Plus the word 'looked' is used. Past tense. Is Charles no longer on the stage? What happened?) Framed in my tiny front room, he looked taller than usual. His strawberry-blond hair, usually slicked back, fell into his eyes now. His face was  etched in a strange sorrow. I wrapped my arms around my chest as I stood in the hallway. (and this last sentence almost makes me wonder if she's wishing she could wrap her arms around Charles.)  I watched my father go up to Charles and take the small letter he held in his hand.
“Please read it,” Charles said. “I don’t know what it says. I don’t even know what has happened.” I'm a little surprised he didn't read the letter. He says he doesn't know what happened, but obviously he knows something has happened. If it was me, and I was as worried as he seems to be I'd have read the letter, just sayin'

My father opened the parchment and scanned it quickly, then looked up at Charles. “You have no idea where she could have gone?  Why?”
Charles shook his head. “I wish I did, sir. This letter was given to me by the writer.(Who is the writer? Molly? Or is this a secret still?) I was given no other information.”
“But you two were so close. Surely you must know something.” This time, my mother spoke. She was a stout, careful woman, and she had been suffering (if she's been suffering maybe we should see some evidence of it - aside from her silence. Is she still weeping? Is her face pale, lined with worry? Just a thought.) in an unnatural silence since she awoke. The sound of her voice comforted me. My mother only really frightened me when she had nothing at all to say. I like this last line.


First let me say I found nothing wrong with the writing itself. And the dialogue was good; it sounded real. But there's one thing I think might make this first page better. Get the reader to bond with the narrator. I don't think it would take much, maybe just explaining the relationship between the narrator and Molly as well as the reason for the worry. Show us how the narrator is feeling, what's flashing through her mind. Then the reader will be worried, too, wanting to know how it all turns out.
But let me also reiterate that this is only one person's opinion - mine - and only the author knows whether these suggestions make any sense for her book. They might not.
Lastly, if you want to know what Dianne had to say about this first page, head over to her blog, and if you would like to submit your first page for next month, email me: marcy@tidewater.net with 'first impressions' in the subject line.