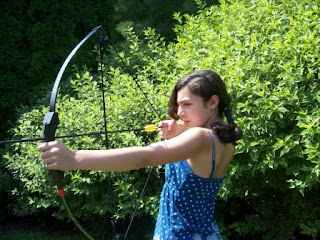 Today we have something from Gabbey, Dianne’s daughter (big surprise - she writes). She's 14 and runs a critique group wiki for teen writers. Any teen writers who'd like to join can email Dianne for an invitation. My comments are in purple and you can read what Dianne had to say here.
Must keep running. Have to get out of here. Have to get out of here.
The boy (I wonder if you want to use the pronoun 'he' instead assuming the boy is the same person having the thoughts above. Using 'the boy' puts a distance between the reader and the narration whereas using he brings the reader closer - in my opinion) stumbled as he ran, weaving through the thick, snaring collection of trees, tripping periodically over roots and the uneven ground, his boots tromping loudly on the dried leaves that scattered the forest floor. His lungs burned fiercely, but he had to run. He had to run. It didn’t matter where. I've cut these words because this is action and I think it would read faster with less words.

Thoughts of Tibius and Ava whirled about his head, spun around him, chasing away the any sensible thoughts that tried to cross his mind. Tibius was dead. Ava was dead. And he was next. At least, he was supposed to be next. I think it's more dramatic ending on the 'he's next.'

He knew they were still chasing him, and he knew escape was invaluable. (I'm not sure invaluable is the word you really want) But where was he to run? Finally overwhelmed by his fear and the responsibilities that had recently landed on his shoulders, the boy stopped abruptly mid-stride, unsure of where to turn. Blackness surrounded him, the trees seemed to mock his uncertainty. If he didn’t run, they’d find him. If they found him, they’d kill him. If they killed him—
His feet skidded along the ground as he began to run again, but he shouldn’t have given them the chance to catch up. The black shapes flickered in and out of his peripheral vision, and whenever he stopped to turn he saw nothing. A hand with claws like death shot out of the bushes and grabbed hold of his ankle.
He let out a startled yelp of surprise and fell to the ground, hitting it hard but barely noticing as he turned over onto his back and tried to pull from the grasp of his shadowy attacker. A long hiss made the hair on the back of his neck stand up, and he yanked himself free before scrambling up, stumbling towards the thick wall of trees, the sight of which he now welcomed. great paragraph here. I can feel the tension!

There was a loud whoosh, and a hand grabbed hold of his shirt collar. The boy thrashed and swung his fists blindly in a flurry of panic, but the person spun him around and hauled him up into the air.
The boy grabbed hold of the figure’s hand, twisting and trying to pry himself away, but the dark figure held tight as though he had fingers of iron. He, too was shrouded in blackness, just as the creatures around him had been—but even in the dim, moonless night, the boy recognized him all too well.

This is a very tempting first page! I want to know who this boy is and who/what he's running from and why and who his friends were that got killed and ...ok, you get the idea. I want to know more and I'm pretty impressed that this was written by a fourteen year old. I wasn't writing nearly as well at this age! Dammit!