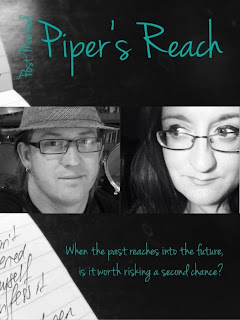 It's a new month and that means First Impressions. Today we have something different, an epistolary novel (a novel written as a series of documents - like letters or diary entries, for example) written by a team of authors (Adam Byatt & Jodi Cleghorn ) who live 12 hours away from one another. This novel was previously published as a web serial at Post Marked: Piper's Reach. My comments will be in purple and you can see what Dianne Salerni had to say over at her blog, In High Spirits.

Please excuse the crappy yellow legal pad. Had I waited to find fancy
stationery, I might never have sat down to write. Your parents are
still listed at Blecker Street, so I’m sending the letter there and
hopefully they’ll pass it on to you. This feels a little formal to me but I'm saying this from an "American" perspective...

Why don’t I just ring your Dad, see if you’re alive and well, and get
your phone number or an email address? I can’t. I need to write and do
it old school with pen and paper. Think about each word before I put
it down (and swear because my hand is already aching from writing more
than I have in a decade). To send an email would be like warping the
fabric of space and time. But then again, writing a letter to you
after so long, feels a little like that anyway. At this point, I'm intrigued.First we have the name Jude which could be male or female, which leaves us guessing. Then we have this long gap since these two people have seen each other. Why? What's happened in those intervening years and, more importantly, why is this person writing to Jude now? What's prompted this?

When we sat at The Point watching the sun come up on 1992 I believed
in an eternity of New Year’s Eves with you, my best friend, by my
side. I had no idea that it would be our last.

Just so you know, it hasn’t taken me twenty years to forgive you for
not showing up at my farewell party. Or at the bus the next day. You
did me a favour. Had you come to say good-bye, I don’t think I would
have had the courage to go and leave you behind. Oh wow. So what happened that Jude didn't show?

I quit my job at the end of last year. Decided it was time for a sea
change, to reassess what’s important in life. Important to me. I’ve
bought an old weatherboard cottage just up the coast from Coffs
Harbour. It’s not Piper’s Reach (I couldn’t go back there) (Ooh, why not?!)
but I’m near the ocean again. I can lie awake at night and hear the crash
of the waves, smell the salt and seaweed.

Finding the shoebox with your letters and other teenage stuff (I still
have the chewie wrapper you gave me the first day we met) it felt like
no time had passed. But at the same time, like I’ve lived several
lives since then. Guess I have in a way.

Reading your old letters there were events I remembered and others I’d
forgotten – like the first thing I ever said to you was I didn’t kiss
boys so you thought I was a lesbian until I pashed Bart Lehmann at the
Year 10 social. I assume 'pashed' is akin to snogged?


This is an interesting beginning. I don't think I've ever read an adult epistolary novel and I'm curious to see where this goes. This first page/first letter tells me quite a bit. Like the fact that Jude and whoever is writing the letter were probably once lovers, that they were close but that for some reason Jude didn't come to see our narrator off, and that Piper's Reach has some shared meaning for them. What's great about this first page is that it sets up lots of questions about the past between these two people but also suggests a question about the future. Why is the narrator writing to Jude now, twenty years later?I want to know what happens next!

What did you think? Do have any suggestions on how to make this first page better?