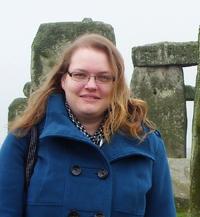 This is the first page of Carolin’s YA paranormal WIP. My comments/suggestions are in purple. Oh, and Dianne and I are still accepting submissions for April's first impression. If you're interested just click on contact me and put first impression in the subject line. And thank you Carolin for submitting!!!


Dried mud tugged (maybe broke or cracked instead, or pulled and cracked? I don’t know, tugged seems a little too hard for mud…or I’m just being stupidly picky!) on her skin as she flexed her cold fingers. Brown coated both of her hands, dulling the vibrant purple on her fingernails. As she lifted her head, pain exploded in her temple and all the way into her jaw. She groaned and let her head drop back into the cool earth.

Her eyes opened a crack. It was dark, almost too dark to see.

Close to her, the remaining leaves of a big willow tree swayed in the breeze and disturbed the utter stillness. The only other sound cutting through the silence was her ragged breath and the uneven heartbeat strumming in her ears. The overwhelming scent of smoke filled her nostrils. It took her a moment to realize that it came from her hair and that little bits of ashes had caught in it.


Fire. It had been warm and comforting, the flames licking on the logs of wood.

No. Not comforting. It had tried to burn her. (I like this.)

Her pulse spiked. Moving her frozen limbs was hard, took too much effort, but her desperate need to flee overwrote all feelings of pain or caution. The autumn leaves crushed beneath her fingers as she pushed herself up against the ground. She steadied herself on her feet after the third try. (I might try to shorten up some of these sentences, eliminate every unnecessary word so that this scene happens fast, like a series of shots. Things are about to get scary and too many words/long sentences slows the action down.)


Shouts rang out from behind her.

“Bring her back.” (Is this all someone speaking or is it the author translating for us? If so I might keep the speaking in quotes and put the translation in italics.)

Showing that she was alive might not have been one of her best laid plans.

I would definitely have turned the page if this were a book. I'd be curious abput who she is and why she decided to show herself. Who are those people and why do they want to kill her? And what burned? Lots of questions and only one way to find out. Turn the page.


***
ps After reading Dianne's critique I realized that one thing that makes her such a great critter is her ability to not only spot what's good in a piece but explain why it's good. Which made me think about my comment above regarding this line:

No. Not comforting. It had tried to burn her. I said I liked this but I didn't say why.

To clarify, I like this because because it's the girl thinking, her thoughts. And she thinks the fire tried to burn her which implies that the fire has a mind of its own. And that definitely makes me want to know (ie read) more.