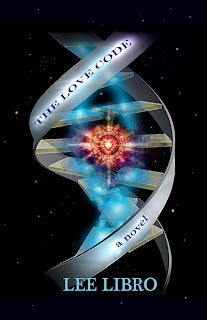 Our first submission for July comes from Lee Libro who blogs, writes and draws from here, here, and here. And after checking out those places all I can say is, wow. Amazing. Especially the butterfly. Anyway, here is the first page of her dystopic YA, The Love Code, Book 1, The Seed. My comments are in purple and you can find out what Dianne thought here.
Chapter 1
Can a single moment, an action or inaction, determine your character? Can it become forever embedded in your destiny like a string of DNA defining who or what you are? Excellent question.
For a long time I didn't think so.  It was all in the DNA. But now, along with genetics, (I'm not sure if you need this reference to genetics - yet. I know that moments of failure or success are just like dominant and recessive genes working internally to fight it out to the end. If we aren't aware of this, we can be twisted against the grain of our true nature.
(Here I would almost like a time reference, like, 'In the last x amount of years I've worked alongside GeniSom scientists...') Alongside other GeniSom scientists, I've worked with these principles (which principles? The principles of dominant genes? Or something else?) in the GMO labs cultivating the super wheat 30 that can nourish a nation from only a one-pound bag, cows with the protein content of elephants, and flowers that can inebriate men and women. But that one moment in time where you don't even know that you, as an organism, are being shaped, a punch in the eye or a pat on the back is just as much a factor as the rest of these principles. (Has the character learned this thru his/her research? If so I might say so like this: 'But I've learned that every single moment we, as organisms, are being shaped and a punch in the eye or a pat on the back is as much a factor as anything else.) Behavioral science. That's how I was made, and yet I never figured it out. As brilliant a scientist smart as I was groomed to be, I never realized that I myself am (should be was, past tense.) the result of a manipulated recombinant cultivation.
The single-most important of these moments was my failure when I was still a child. (Wouldn't someone this smart know, logically, that children can't be held responsible for actions - or lack of - which they don't understand? Just asking.) The thing I failed to do should have been a simple task. In light of our hardships, I should have put blinders on, and as the old Nike ad said, been able to "just do it."
I could have made the task a simple aversion from our normal routine. Ma and I had finished our work early and we'd gone to run an errand. We were walking along the road leading along the outer perimeter of our Sector. I always liked that end of the Farmmune because you could get a glimpse of what lay beyond the barbed wire fences, the golden hills to the west of Salinas Valley, our former home. Like this last paragraph. Great word choices: sector, Farmmune, barbed wire.


Especially the barbed wire fences. Made me wonder, are they inside the fence or out? What is about to happen? A defining event perhaps? I'm definitely curious and the whole science/genes thing interests me. I would read on!
What do you think? Agree? Disagree? Please comment! Just remember to be kind and helpful.
Thanks for stopping by and remember, my comments and suggestions are simply that, comments and suggestions. Ultimately it's up to the author to decided what will work best for the story he or she wants to tell.
Posted by mshatch at 6:21 AM