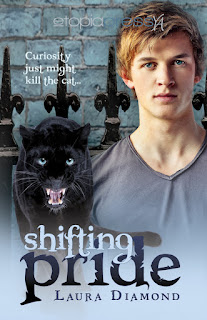 Today's first impression comes from Laura Diamond who can be found either at her blog or her author site. This is the first page of her short story spin off to her debut, SHIFTING PRIDE. My comments will be in purple and do head over and check out Dianne's critique of this same first page.

The world split before me, torn open by a road of steel steel road slicing its way through the countryside and arcing across the Tsavo River. This was my land, my territory, that the outsiders were digging up, claiming it as theirs to further their own agenda. Only a fool would allow such an invasion and I was no fool. Problem was, the more I cleaned the fields of foreigners, the more showed up to take their place.
Then Patterson came. The Colonel and Engineer who promised to rid the Uganda Railway project of the scourge attacking it. He made Lutalo and I sound like monsters when all we were doing was defending what was rightfully ours. It wasn’t our fault we had to use extreme measures. (
The only difference was that we’d be successful. < but this sounds like the future.
Patterson thought he could defeat us. He was wrong. Lutalo and I were invincible. Invincible gods with the power to do anything and everything we wanted. The local tribes knew it. So did the Indian immigrants (un)fortunate enough to labor for the British to build the railway bridge.
The workers—who stayed in camps littering along the thirty miles (this should either read, littered along the thirty miles, or littering the thirty miles) or so of the ever-lengthening railway—feared us.
As it should be.
But Patterson didn’t. His foolhardy narcissism would be our playground.

I realize this is a spin off, and perhaps this first part is a reminder of what has already occurred, but there's a lot of telling, which takes away from the impact this opening could have. I suggest replacing at least half (if not more) of the "to be" verbs (highlighted in annoying yellow) with more active verbs. Show us who Patterson is. Then show us who Lutalo and the mc are and what they're going to do or what they can do (those extreme measures, perhaps?). And if Patterson is the bad guy, show us that, too. I want to know who to root for and this opening doesn't quite make it clear. Of course, I also realize this is a short story, so there may have to be more telling than in a full length novel, but I think by replacing those passive verbs with some kick-ass verbs, this opening can be a lot stronger.
Now, what do you think? How do you think Laura can improve upon this first page?