So this girl walk into the shop this afternoon…

She’s probably in her 20s, dyed pink hair, baseball cap, coat way too big, chunky high heel booties and no socks (it’s 23F and blowing at around 14mph so me, I’d opt for socks on a day like this). She’s got a tattoo around her neck, and some stars by one eye. She’s high on something or maybe coming down, very soft-spoken, and weepy. She talks to herself a lot.

I am simultaneously repulsed and sorrowful. Repulsed because she’s so out of it, so not here, and who knows what she’ll do? Steal stuff? Freak out? Sorrowful because whatever road brought her to where she is has not been a happy one.

She has keys and a car she can’t drive because she doesn’t have a license. Her friends left her. One of her boyfriends beat her so bad she has brain damage. She has a son. She likes the fake gold snake belt and matching bracelet, the samurai sword with the leopard sheath, and a gold plate necklace. She trades a knife for the sword.

She was still there when I left, freaking out over the fact she was much further away from home than she thought (she didn’t even know what town she was in), and I wonder what will happen to her. Where will she go? There are no homeless shelters in rural Maine. How will she get home? What kind of friends leave someone under those conditions? Did they just ditch her because she’s a pain in the ass? I mean, I didn’t enjoy having her about so I can’t imagine anyone else would. But still, pretty shitty.

Then there’s the car. Who drove if she didn’t? Did they leave on foot? Because it wasn’t nice weather to be out in for any length of time unless you were dressed for it. She sure wasn’t. But I didn’t see who (if anyone) she came in with.

Now, why am I telling you this sad story?

Two reasons. One, something about her made me think about her and her story and how shitty it is right now and I needed to share it. Two, because maybe we can think of a happier ending for her. Does group positive thinking/prayer work? No idea, but it can’t hurt so that’s my challenge. Think of a happy ending for this girl. A way off that road and onto a better one.

In my perfect world, there would be someone to call to help, or at least offer help if she needs it, a ride home maybe. Sometimes it only takes a small act of kindness to make a change and it never hurt anyone to be kind. Anyway, I hope she can find her way out to a happier place, and I sure hope she finds some better friends.

In other news, I’ve read three books this year so far:

The Three Body Problem by Cixin Liu – winner of the Hugo Award for Best Novel – hard scifi and over my head at times, no characters to care about, but I couldn’t put it down

Hex by Thomas Olde Heuvelt – Horror. Imagine living in a town with a witch and a vow of secrecy.

The House in the Cerulean Sea by TJ Klune – fantasy starring a very unlikely hero who works for The Department of Magical Youth and the magical youth he’s sent to investigate. Among them, Lucy, aka Lucifer, a six-year old boy, a boy-creature whose dream is to become a bellhop, a gnome, and some locals who don’t particularly like have an island full of potentially dangerous magical youth next door.

Currently reading The Death of Jane Lawrence, watched The Witcher and am so bummed I have who knows how long before another season *sigh* also watching Star Trek: Discovery, Killing Eve, and The Great.

Finally, an amazing chalk drawing my sister did, preserved in digital form only since it was for school and every week or so she erases the old and puts up a new one. 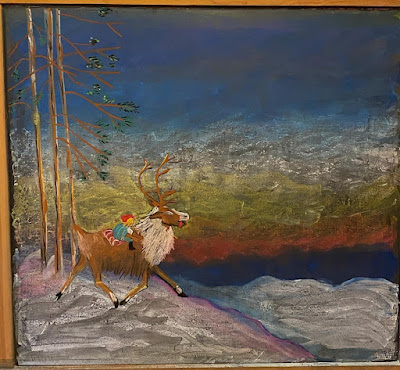